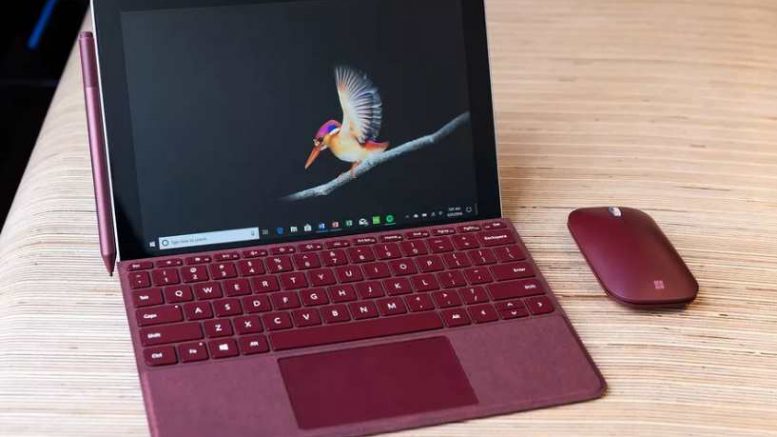 The rumors were true! We now have a budget version of Microsoft’s Surface, the Surface Go!

There have been a lot of rumors around a possible budget-oriented Surface device. And it turns out, we do have a budget Surface device, the Microsoft Surface Go! The Go does no bring any changes when it comes to design. It has a 10-inch FullHD touchscreen with a 3:2 aspect ratio. You also get the signature kickstand at the back, as well as Microsoft’s proprietary connector, used for charging the device and connecting to a desktop deck. Microsoft has added a USB-C 3.1 port, capable of charging the tablet or outputting video and data to external devices.

Microsoft says the Surface Go Signature Type Cover provides “laptop-class typing” with a scissor key mechanism and 1mm of key travel. The trackpad is actually larger than the trackpad on the current Type Cover for the Surface Pro. If you get the keyboard, it will cost you another 99 USD. And you can also get the pen for another 99 USD; and Surface Mobile Mouse will set you back another 35 USD.

Performance? For the CPU, you have the Intel Pentium Gold 4415Y. It is a dual-core CPU, with a base frequency of 1.7 GHz. It is not much, but at least it has hyper-threading. Microsoft claims that they choose this CPU because it is a great balance between battery life (up to 9h, they say), performance, and thermals, since the Go has no active cooling. You can choose between 4 and 8 GB of RAM, and the cheapest model has 64 GB of eMMC storage.

You have Windows 10 running on it, of course. However, it is in S Mode out of the box, but you can turn it off for free and switch back to normal Windows if you want – and you probably should. An LTE version will arrive soon. It is available for preorder starting July 10th and will ship in August.

Be the first to comment on "Meet Microsoft Surface Go"