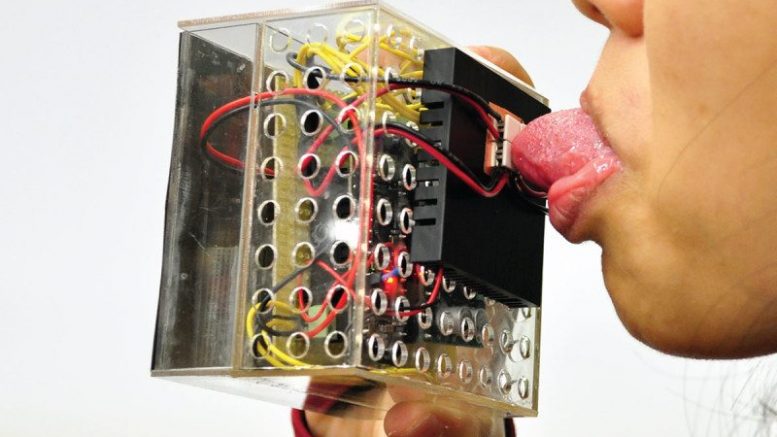 You’re having dinner in a virtual reality game. The banquet scene in front of you looks so real that your mouth is watering. Normally, you would be disappointed, but not this time. You approach the food, stick out your tongue – and taste the flavours on display. You move your jaw to chew – and feel the food’s texture between your teeth. 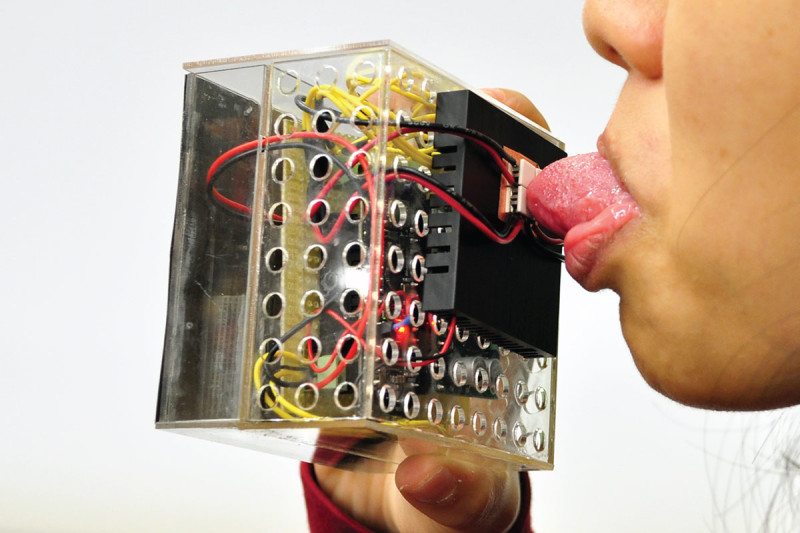 Presenting at the ACM User Interface Software and Technology Symposium in Tokyo last month, Nimesha Ranasinghe and Ellen Yi-Luen Do of the National University of Singapore revealed a nifty interface for stimulating sweetness.

Using a 9V battery, their virtual sweetness instrument uses a grid of four elements which generate temperature changes of 5°C in a few seconds.

When applied to the tip of the tongue, the temperature change results in a virtual sweet sensation.

While the initial findings are promising, the pair report that in a small test of 15 people, only eight registered a very mild sweet taste.

A prototype of the device incorporated into a spoon is currently being developed, with trials to start in early 2017, which could lead to a taste-enhancing technology for dieters andor those with health conditions.

Dr Ranashinghe told MailOnline: ‘We believe this will especially helpful for the people on restricted diets for example salt (hypertension and heart problems) and sugar (diabetics).
‘Similar applications will be explored with thermal stimulation of sweetness as well.’

Several projects have succeeded in tricking us into tasting things that aren’t there. Nimesha Ranasinghe at the National University of Singapore has already experimented with a “digital lollipop” to emulate different tastes, and a spoon embedded with electrodes that amplify the salty, sour, or bitter flavour of the real food eaten off it. However, his experiments with electrical stimulation had less success simulating sweetness compared to the other tastes. But digitising this taste could be particularly useful in, for example, helping people cut back on sugary food or drinks.