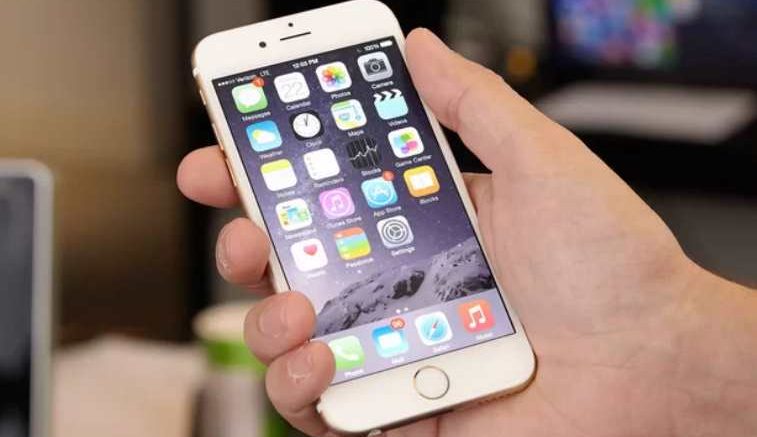 Mobile devices are fragile little things. Drop them the wrong way, and you don’t have a working phone anymore.

Mobile phones do fail on us, some more than others. It can be for multiple reasons, and on multiple ways – dropping the phone, getting splashed, overheating, then your camera might die, the SoC can burn out, the screen can stop working… A lot can go bad. Thankfully, phones have evolved, and their failure rates are lower than ever. Despite this, however, some phones still break down more than others.

According to this report from BLANCCO, Samsung, Xiaomi and Motorola phones break down the most, with a 34, 13 and 9 percent failure rate respectably, in Q4 of 2017. While it is a huge number, Samsung is improving, since they had a 61 percent failure rate in Q2 of 2017 and 53 percent in Q3 2017. It’s worth noting that the top two firms account for largest number of Android sales, which means the results are slightly skewed as they have more phones out there that could potentially fail.

Xiaomi Redmi 4 is the one to fail the most, with a 9% failure rate, while the Galaxy S7 has 3%. Do note, however, that Samsung has more phones on the list. 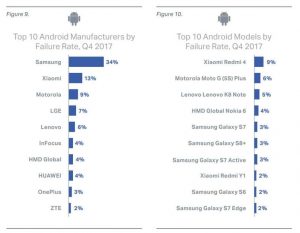 Well, Apple devices break down, too. The Apple iPhone 6 is most likely to fail on you when you most need it, with the highest failure rate, at 26 percent. But do keep in mind that the iPhone 6 is the best-selling iPhone. 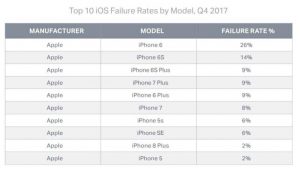 On the beginning of the article, I mentioned a few reasons why a device may fail. Well, as it turns out, performance is the number one reason why an Android device can be classified as “not working”, at a massive 27 percent. Meanwhile, on Apple’s side, Bluetooth is the main reason, but at a small 3%. 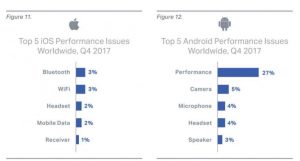