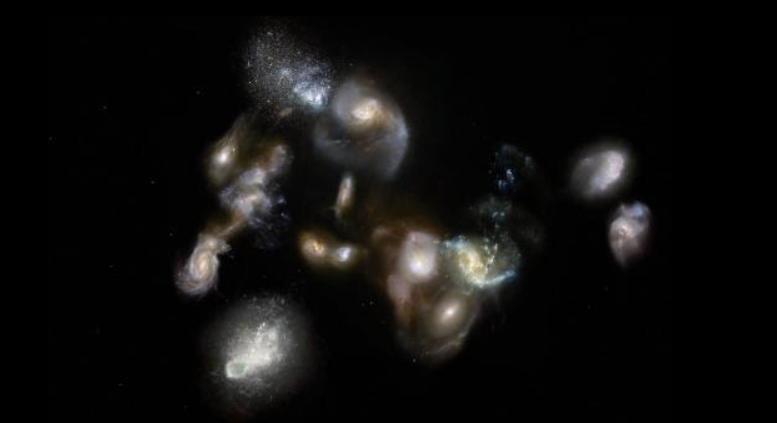 A pileup of vast, ancient galaxies has been spotted, and they are all merging.

Discovered recently by a international team of astronomers, it is believed that this galactic cluster is on the far edge of the observable universe. Using the Atacama Large Millimeter/submillimeter Array (ALMA) and the Atacama Pathfinder Experiment (APEX), the scientists discovered an extremely dense concentration of young galaxies that are about to merge and form a galaxy cluster—the largest structure in the known universe.

“This is a truly unique object, originating back to when the universe was only 1 billion years old,” Carlos de Breuck, one of the authors of a new Nature study describing the findings, told Newsweek.

This galactic pileup is named SPT2349-56, and is some 90 percent of the way across the observable universe. Because light takes a while to get to us from here (billions of years), scientists are basically looking back in time.

The individual galaxies in this megamerger are known as starburst galaxies—galaxies that are undergoing exceptionally high rates of star formation. In fact, scientists found that this region was the most active ever observed in the young universe. “In our neighborhood [the Milky Way], we see that about one star gets formed per year,” De Breuck said. “In SPT2349-56, there are at least 7,000 such stars formed per year, and maybe as many as 15,000. So the sky would look much brighter if we were living on a planet in the SPT2349-56 cluster.”

Be the first to comment on "Vast galactic megamerge discovered"