Remember when the iPhone 5S was a bug deal? Yeah, it was a while ago. But it is still capable of running the latest iOS, iOS 12,

Released all the way back in 2013, and starting from iOS 7,the iPhone 5S is still getting updates. It is quite amazing how Apple manged to get iOS 12 running on a phone with only 1GB of RAM and a dual-core A7 CPU. That does not sound like it will improve performance, however, it really does!

Apple claims that iOS 12 will speed up iPhones by a noticable margin. Using an iPhone 6 plus for an example, they claim that apps launch up to 40 percent faster, keyboard comes up 50 percent faster and Slide takes a photo is 70 percent faster.

According to their testing, there is a notable improvement when launching certain apps. 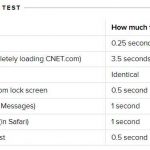 Numbers tell the tale. However, it seems like the boottimes suffered, since iOS 11.4 boots notable faster.

You can read more over at CNET.