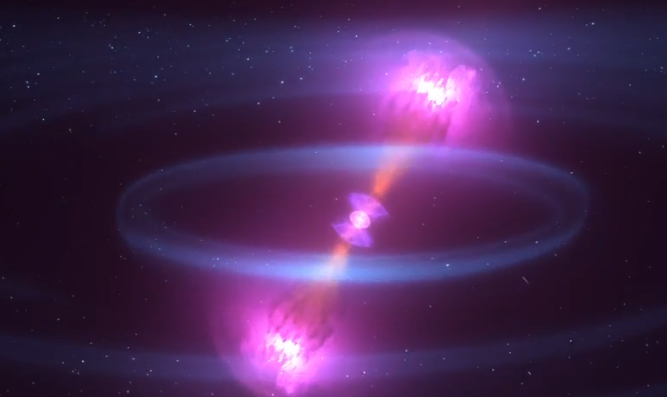 A rare event is happening, causing the laser to head towards our Earth. It appears that a twin star system is dying.

This rare event has been spotted by the European Space Agency’s Herschel space observatory. The event is taking place in a spectacular nebula, called Menzel 3.

Since it is a twin start system, one of the starts in is capturing the mass being ejected by the other. Isabel Aleman, lead author of a paper describing the new results says..

Thanks to the sensitivity and wide wavelength range of the Herschel observatory, we detected a very rare type of emission called hydrogen recombination line laser emission, which provided a way to reveal the nebula’s structure and physical conditions. We used Herschel to characterise various components of gas and dust in nebula around old stars, but we were not necessarily looking for a laser phenomenon,” adds Toshiya Ueta, principal investigator of the Herschel Planetary Nebula Survey project. Such emission has only been identified in a handful of objects before; this was a remarkable discovery that we did not anticipate.

An event like this has only been seen a few times. It is amazing what is hidden in Space. Who knows what else is out there, waiting to be discovered.