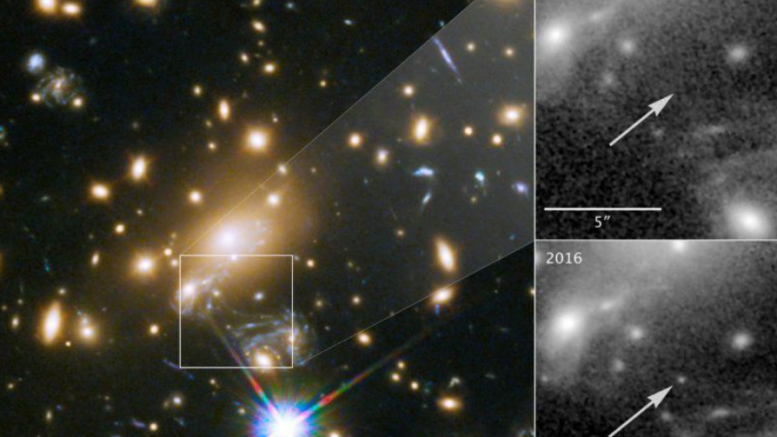 A new star has been confirmed to be the furthest away from us – 9 billion light-years away from us!

The newly discovered plant has been spotted while scientists have been observing a distant supernovae, SN Refsdal. Scientists have been able to spot it thanks to the awesome Hubble telescope and a technique called gravitational lensing. This basically means that massive space objects can bend light because of their mass. And this gives you an idea just how big a star has to be to be visible from 9 billion light-years.

The official name is MACS J1149+2223 Lensed Star 1 (very creative). However, researchers have named it Icarus, for simplicity. When something reaches a distance of tens of billions of light-years away, there’s a slim chance we’re going to spot it. For the Hubble Space Telescope to catch these faint flickers of light, they have to be something with a pretty powerful glow, like supernovae, gamma ray bursts or bright galaxies. But as Elizabeth Howell at Space.com reports, using a special technique, the Hubble caught a glimpse of a regular old star that lies 9 billion light years away, the most distant single star yet detected.

However, keep in mind that this star no longer exists. It is impossible for the star to live this long. What we are actually seeing is just light, emitted by that start, and it is only now coming to us. The start is now either a black hole or a neutron star.